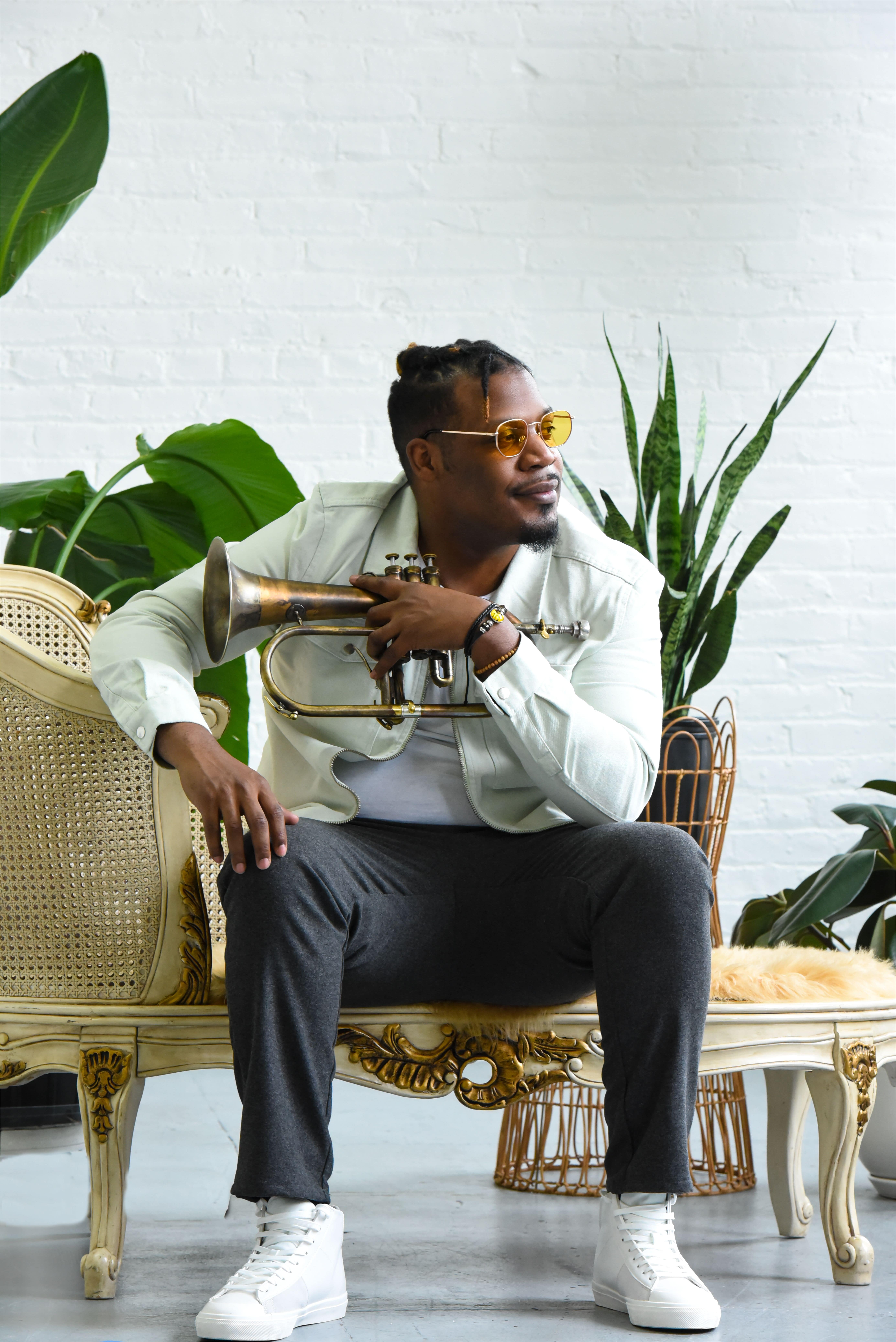 Musically, Harrold lives by the notion that the only thing that identifies a genre is its beat.  That belief has allowed Harrold to tear down the walls of the genre to roam music freely. There are only 12 notes, so he pours his soul into every musical situation, be it performing live and leading his band, recording, composing for television and film, mentoring youth, and teaching music.
“Keyon Harrold carries a natural swagger that is not misplaced: he’s a compelling communicator and commanding trumpeter.” The magic of his performance is the accomplishment of a quintet that resonates as both accomplished and raw, the seeking of new challenges...” -Love Supreme Festival
Keyon’s career is a spectrum of greatness in terms of collaboration and as a solo artist.   He is a once-in-a-generation type talent on trumpet. His approach and sound are personal as well as engaging; a sort of magical haze often referred to as modern-day Mile’s Davis.  Keyon was the trumpet voice of Miles Davis in the “Miles Ahead Film by Don Cheadle; in which the soundtrack received a Grammy Award.
From touring and recording with Jay-z (“Roc Boys and the Winner is”-American Gangster Album), Beyonce (Bday, Renaissance 2022)
Erykah Badu, D'Angelo, Cirque Du Soleil being signed by legendary Rapper Nas (Mass Appeal), and writing the theme song for The Queen Latifah’s Show.
Keyon is a first-call trumpeter, arranger, composer, and music producer, with feature credits on many Grammy Award Winning and Nominated Albums.
Keyon has worked in the studio with Keith Richards, Dianna Ross, Black Pumas, Mac Miller (Stay), Big K.R.I.T., and the God MC Nas (The Jarreau of Rap) Leon Bridges (Gold Diggers Sound), and UK crooner Samm Henshaw (Still Broke).
Keyon is a frequent collaborator with YEBBA (Distance), Robert Glasper (Black Radio lll, The Photograph, Miles Ahead, Maxwell (Black Summers Night), Common (Beautiful Revolution pt. 1&2, PJ Morton (Emotions, Gumbo, Gumbo Live), and Gregory Porter (Be Good, Take Me To The Alley).
Harrold is the Artistic Advisor for Jazz St.Louis.
He is an activist for social justice, change, and equality.
Keyon has two critically acclaimed albums “Introducing Keyon Harrold” (Criss Cross) and The Mugician (Sony Legacy)
Keyon has signed to Concord Records and his new release is coming top of 2023.

"Keyon Harrold’s pop sensibilities and activist leanings shine through on the album, which is tied together by its catchy melodies – a rarity in critically acclaimed circles of modern jazz." - Natalie Weiner, Rolling Stone‍

On special request Keyon Harrold can present “JAZZ & THE BIRTH OF HIP HOP” and special guest PJ MORTON aswell as LAURA MVULA can be invited. (subject to avail)